A 52 yof complains of chest and epigastric pain.Â Here is her 12 lead ECG: 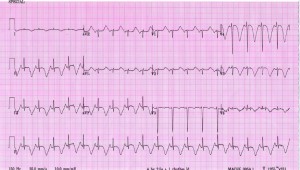 AÂ CT scanÂ revealedÂ a blockage in the R-MCA. The CT scan also indicated that the right insular cortex of the patientâ€™s brain had been ischemic for some timeÂ beforeÂ the stroke had occurred.

The T-wave abnormalities you see (often referred to as â€˜neurogenicâ€™ or â€˜cerebral T wavesâ€™) were cause by damage in insular cortex of the patientâ€™s brain.

How does damage in the brain cause stress and possibly damage to the heart?

As we discussed inÂ part 2, the insular cortex plays a role in maintaining homeostasis and exerts some control over the heart.Â It does this by nerve fibers which link the insular cortex directly to the heart and release catecholaminesÂ directly into myocardial tissue.Â (Source)

Letâ€™s look at anotherÂ case study:Â A 69 year old woman is admitted to the hospital in a coma. Her 12 lead ECG shows deeply inverted T waves in the anterior and precordial leads. 2 days later her ECG shows ST elevation in the same leads. Unfortunately this patient did not survive. An autopsy was performed however absolutely no sign of cardiovascular disease, myocarditis, or pericarditis were found.

Why did her ECG show ST elevation?

The autopsy did reveal a ruptured berry aneurysm.

How aboutÂ thisÂ experiment: stimulating the hypothalamus (which connects directly to the insular cortex) of cats produced ECG changes and myocardial necrosis.

It seems that damage to the brainÂ causesÂ an increase in the amount of catecholamines released right into the heart (bypassing the circulatory system) and that the heart is much more sensitive to these catecholamines directly released versus the catecholamines circulating in the blood. Normally the circuitry in the brain uses these neurotransmitters to regulate homeostasis but in the damaged brain excessive stimulation can be sent to the heart. Also interesting is that fact that the insular cortex is connected to parts of the neural circuity which play a role in emotion. Have you ever had your heart race when you feel the sensation of love?

Letâ€™s go back to the first case study and piece it all together. The likely scenario is that a small clot was lodged deep in the circulation which fed the insular cortex resulting in ischemia. The dying brain tissue malfunctioned and signaled the release of an overload of catecholamines into the heart. This resulted in myocardial damage and caused the pain which the woman presented with and the ECG changes. A short time later a larger clot got stuck in her R-MCA causing the full stroke.

This â€˜heart-brain axisâ€™ is a proposed mechanism for the ECG changes seen during acute strokes and raises a flag to suggest that some of the symptomatic chest pains and possible â€œMIâ€™sâ€ we treat may beÂ caused by damage to the brainÂ instead of a blockage in the heart. Itâ€™s also been suggested that this mechanism contributes to sudden death.

As we previously mentioned, the prehospital utility of ECGâ€™s in acute stroke is debatable but they are of extreme importance in the hospital for helping diagnose the etiology of the stroke and formulating a treatment plan. Further research (such as comparing prehospital 12 leads to arrival ED 12 leads and assessing for significant changes) is needed. Until then, itâ€™s a great example of the emerging field of neurocardiology and an exploration into the mysteries of medicine.