Pathophysiology, Stroke | neuroems | 1 Comment
Recall from part 1Â where we discussed how common it was to observe 12 lead ECG changes in stroke patients. Now letâ€™s look at regions deep inside your head thought to be responsible. In each hemisphere of the brain thereâ€™s a part of the cerebral cortex which folds over on itself. Itâ€™s called theinsular cortexÂ and it looks like this: 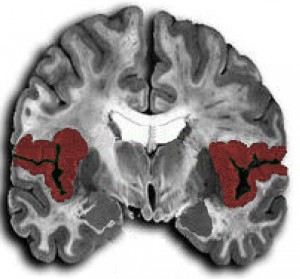 Note the areas shaded in red as they represent the right & left insular cortex.

Modern neuroimaging techniques such as functional MRI (fMRI) indicate to us that the insular cortex communicates with the anterior cingulate gyrus and the amygdala to regulate cardiovascular function. The authors ofÂ this studyÂ propose a neural network (which they call the brain-heart axis) exists.

Hereâ€™s the amygdala from a side view: 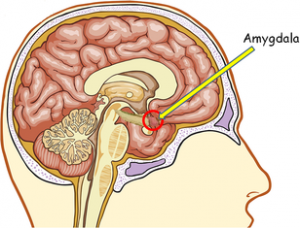 And hereâ€™s the right and left amygdala (in each hemisphere) on an fMRI as if you were looking face-to-face with the person being scanned: 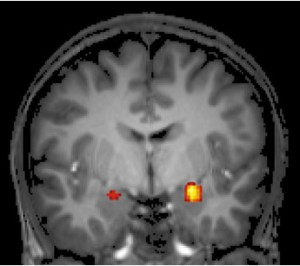 The amygdala plays aÂ critical roleÂ in emotion which makes it all the more fascinating for it to be implicated in the neural network which helps modulate the heart. It accomplishes this regulation through nerves and neurotransmitters: acetylcholine, norepinephrine, other endogenous catecholamines, & sympathetic/parasympathetic fibers.

So circling back to strokes. If these brain regions affect what goes on in the heart (and what you see on an EKG) then how does a stroke affect them? Enter theÂ middle cerebral arteriesÂ (MCA) which supply the vast majority of the blood to the insular cortex regions. Either large MCA strokes, or strokes further down the pipeline into the smaller vessels which supply the insular cortex (and surrounding structures), can cause damage to this network.

Abboud, et. alÂ looked at 12 Lead ECGâ€™s from 493 patients which suffered stroke in the right insular cortex as verified by MRI and also 493 control patients then followed both groups for 5 years. Patients with right insular stroke lesions (and in particular those with Long QTc and LBBB on their 12 Lead ECG) showed greater mortality at 2 years.Â OthersÂ have performed similar studies.

Itâ€™s important to note, especially in the prehospital setting, that there is presentlyÂ no consensus on using the ECG to predict lesion location or severity and the utility of even obtaining a prehospital 12 lead during an acute stroke is up for debate. At this point itâ€™s a novelty to help understand the mechanisms of the nervous system but perhaps one day this could materialize into something with serious diagnostic or prognostic value.

Now on toÂ part 3Â where we discuss in-depth how the brain can kill (or injure) the heart.